PRINCESS AND THE PEA 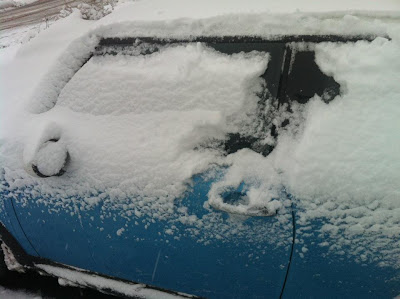 My dear husband was away for over a week. It was supposed to have been four days, but he heard the siren song of the Mini-Cooper, tossed his return tickets in the trash and decided a trek across the nation was just what the doctor ordered.
Just a little info~he's 6'4 and so was his driving companion. Also, they had double the luggage, on account of they flew to the Carolinas to ride motorcycles through Ashville and surrounding areas. Well, it's cold on a bike, so there were helmets, leather jackets, riding boots, snowmobile suits, etc. Anyway, wrap all that up and tie it in a bow called mini, then open it up after a 3 day road trip and see how things turn out.
Actually, things turned out way better than expected. Especially when you consider that Jeff split his eyebrow open immediately upon entering, not ducking quite low enough to climb in, they got caught in an unexpected winter storm where the driver's door froze shut and required the two of them to climb in and out of the passenger side for two days, they pulled away from a gas station, without realizing they'd left the nozzle in the tank, and the Mini sits 3 inches from the asphalt, leaving the two men starring in their own version of The Princess and the Pea for the entire journey.
Surprisingly, they arrived laughing and joyful, which could be due to medication, but listen, who am I to look that gift horse in the mouth?
Speaking of mouths, mine keeps putting stuff inside of it. However, as I type this, I can look in front of me and see the box holding the walking gadget thingy whopper that will keep track of any calories that I leave behind in a burning heap of rubble, if I exercise. So there is intent, no matter what you may have heard.
But somehow, it still seems like toil and labor. And you know how I feel about that kind of verb and noun. Now if there were some sort of adjectives in front of them, like, "DELICIOUS, CHOCOLATY toil." Or "RELAXING, EFFORTLESS labor," well, things might be a little bit different around here.
But until you can find me some of those rectifying adjectives, I'll just keep staring at that gadget box. And hoping you take care of things before it's too late.
It appears I'm a Socialist. Now who is in charge of paying back my student loans?...
Posted by Lisa at 10:39 AM 8 comments:

DO OVER DAM BRAIN

I could have slept in today, guiltless, on account of it was UEA break. Which is why my brain said, "Hey, I don't think this will be nearly as much fun for you to sleep in when you can—you know, when it's legal. So just sit back while I open the...hold it...just about...GOT IT! I JUST OPENED THE DO OVER THOUGHT DAM! SORRY! I HAVE TO SCREAM OVER THE TORRENTIAL FLOOD WATERS OF REFLECTION THAT I'VE KEPT IN YOUR SUBCONSCIOUS, JUST WAITING FOR THE RIGHT TIME TO LET THEM GO! AND I KNOW IT'S 4:47, BUT THERE'S NO BETTER TIME LIKE THE PRESENT TO LET YOU FLIP AND FILTER THROUGH EVERYTHING YOU'VE DONE, DO NOW OR WILL POSSIBLY DO IN THE FUTURE THAT HAS, DOES OR MIGHT POSSIBLY CAUSE IRREPARABLE HARM TO YOUR FAMILY, YOURSELF OR YOUR REPUTATION. HAVE FUN!"
Dam brain.
Posted by Lisa at 11:17 AM 8 comments: 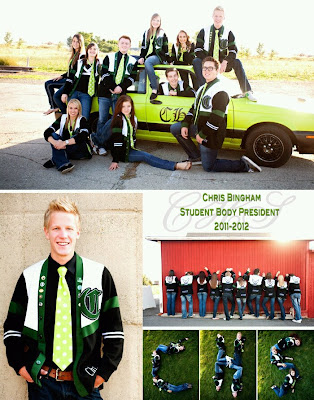 Beautiful pictures taken by my equally beautiful and exceptionally talented sister, Kara.
Pretty cool, eh? Or as my son would say, "Fartnocken' bombshiz awesome!"
Because he's classy like that.
The apple doesn't fall far from the tree.
Posted by Lisa at 8:36 PM 5 comments:

I made booger snot witch noses, friends. A terrible error in judgment.
If you're not "up" on the latest Halloween treats, then let me fill you in; 3 cups sugar, 3 cups Karo, 3 cubes butter, a smidgen of green food coloring and vanilla, and six All a dollar bags of Bugles. Which translates into 2 1/2 extra chins for my missionary son to pretend he doesn't notice when he gets off the plane in a couple of months. And we take lots and lots of family pictures, proving my excessive chin ratio. And I tug nervously at my uncomfortably tight cardigan that's meant to camouflage the rolls of not boob but slap on a nipple and suddenly yes, could be boob, fat rolls. I like to think ahead, people. And then act with wisdom and restraint when faced with temptation. I don't like how you're looking at me right now—if I didn't know better, I'd think you were making some sort of judgment call...unrighteously. (two fingered eyeball point)
Anyway, I did okay, in that I gave three of the six portions away. But if you graduated high school business math with a flourish, like I did, you'll conclude that there were still three portions left.
In my kitchen.
In a bowl.
Staying gooey under the warm halogen lights.
You might notice there's no picture of said booger snot witch noses attached to this blog post. That's on account of I had to destroy the evidence. They were the voice in my head all last night, early this morning, continuing on until around dinner time. I had no choice but to silence their screams over the course of 24 hours with my teeth and stomach acid. So it's okay—you can come out now. You're safe. The wicked witch noses are dead.
And you're welcome.
Posted by Lisa at 8:04 PM 5 comments: 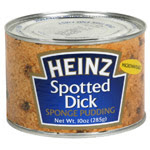 A few weeks ago, we bought us some Spotted Dick. I shiz you not. Did anyone else know there was such a thing? And that it can be found at World Market rather than an infectious diseases clinic? Yeah, us either. Neither. Whatever.
Anyway, yes, somebody out there is still sticking to their spotted dick guns, insisting in their English accent that there is "NOTHING WRONG WITH THAT NAME! I DON'T CARE WHAT THE WORLD HAS DONE TO IT~IT'S JUST SPONGE CAKE AND RAISINS!" They're the same people who keep naming their daughters Gay. While filling their plate with hors d'oeuvres, asking the hostess who cut the cheese?
Bless their hearts.
But I get it. I mean, seriously, it ticks me off how someone can take a perfectly lovely noun, verb or adjective and give it a revolting connotation. This changes our world, people. Just think of those poor pitiful peeps having taken for granted that Johnson would always be a good, strong, respectable last name. I wonder how they would feel, if somebody used their name to label, oh, let's say bum goats?
"Eeeewwww. She's got some major Misty going on there."
But now that I think about it, why was somebody allowed to label underwear going up a rump crack, "goats?" Poor animal. What did they ever do to deserve this stinky wedgie implication? And speaking of wedgies, those were SHOES, people. Still are, just like thongs. And yes, once again, we have a poor unsuspecting flip flop shoe that had the misfortune of being worn by the lingerie designer who decided a string of bum floss resembled his footwear. Which brings us to poor unfortunate floss. Far as I know, floss is for TOOTH DECAY, not fanny cheeks. How did HE get mixed up in all this wretchedness?
You see? It's the song that never ends. And I'm angry, folks. They've maligned all sorts of beautiful, helpful contributors to society. Farm animals. Shoes. Happy people. Cheese cutters. When will it ever end?
Likely, not until every one of our names ends up in that steaming pile of verbal vomit...or should I say "ralph"...
Poor guy. He never even saw it coming....
Posted by Lisa at 8:52 PM 11 comments: