I've spoken of this before, but if satan had a bride, it would be February. She comes in under the guise of red hearts and love, but ends up destroying your mental and physical health with her fugly weather and boxes of nuts and chews.

But even in the midst of all this mind numbing wretchedness, my brilliant (she said objectively) filmmaker son, Ashton, was able to create a masterpiece. He called me up the other night and said, "Hey, remember a while back when I filmed Aunt Kara's family? I was going to make something really inspirational. It kind of took an unexpected turn. Anyway, I just sent you the link, and want you to watch it while I'm on the phone with you."

So I clicked the link and IMMEDIATELY sucked as a mother. There on the screen—in all its light filtered soft focus glory—was everything I should have been when my children were young. But wasn't.

I tried to feign happiness for Boo, as I saw her children be beautiful and well dressed and obviously straight A students (even the 18 month old), while they made cookies in a clean, sunshiny kitchen, all smiles and benevolence. Plus Kara, so patient and gentle with only one chin and one digit on her jeans. I was pretty sure that when I made cookies with my children, I was wearing an apron over a stained nightgown while I shoved yesterday's breakfast dishes out of the way and intermittently wiped left over mascara out of the corners of my eyes. If I even made cookies? Hard to say.

Then it faded to black...and a few seconds later, opened on a new perspective.

It's what happens when the music ends that made my heart sing. Turns out the song had drowned out the reality. So the next time you suck as a mother, crank up the chosen soundtrack of your life and know that, one day, you'll remember this through a soft focus lens.

CRYING GIVES ME A HEADACHE

Forty years ago, my parents built the most magnificent house you've ever seen. It had two stories, you guys. And by two stories, I mean a bi-level entry that led you upstairs or down. Listen, I don't know where you come from, but around here, that's two stories.

It also had glorious brown and gold sculptured carpet, two and a half bathrooms and a wobbly, non-functioning banister that was for "looks only". What can I say? We were a decadent bunch back then.

Since ours was one of the first homes in the new subdivision, we felt the responsibility to fill in the vacant air with lush landscaping. And being poorer than church mice, on account of blowing our wad on glittery popcorn ceilings, we could only afford Cotton-less Cottonwoods. Otherwise known as "trash trees".

These trees were the prostitutes of the neighborhood. With their come-hither leaves and bare trunks, they lured us in with a cheap price and promise of summer shade. All the while refusing to put down roots and actually commit to a long term relationship. They grew a few inches every minute, so by the time they were two, they were big enough to hold a tree-house. At the five year mark, they were twice the size of our home. Teenaged boys would scale the branches and look into my window and my neighbor, Tish Graham, would call and warn me not to get undressed with the lights on. But I'm not gonna lie—I was kind of flattered they thought there would be something to look at.

Fast forward about 20 years. The tree in the backyard succumbed to a bug infestation and cracked in half during a summer storm. We knew it was just a matter of time before the same thing happened to the front tree, and were worried because the branches hung so close to the house. My parents checked with their insurance to see if they'd pay for removal. No, they said. We won't pay for prevention. We want to make sure the cancer has spread before we get you in to see the doctor.

Enter stage right—the new son-in-law, Sterling. Eager to please his wife's parents and feeling manly—bless him—he spoke up with confidence and declared, "THIS IS EASY. I KNOW JUST WHAT TO DO."

And we believed him.

He picked up his chain saw and went to work, cutting down a few of the smaller branches in preparation. This soon became tedious, so he figured he'd just get right to it. He tied one end of a rope around half of the tree, and the other end to the back of his Pathfinder.

"As soon as we cut through that big branch," he explained, "I'm going to pull it away from the house with my SUV really fast." This sounded reasonable to us. Course, nobody did any sort of math...mostly because that seemed like a lot of work. Permit, you ask? Well, that's just silly. We didn't need no stinkin' math or permits because we had faith. Plus a couple of grown men in the neighborhood joined in to help, which was as good as a blessing.

By then, the entire community had gathered around, setting up lawn chairs and placing bets. The excitement was contagious. I was told to keep all of the small children away while Larry Waite shimmied up the tree with his chain saw, and Sterling and James Barnhill climbed into their vehicles, ready to pull, "really fast".

With the snap of the branch, the men punched their accelerators and were both promptly yanked right off the road and into the air backwards, as the tree took a split second to decide, then chose to do whateverthehell it wanted to do. And it wanted to fall onto the house.

Every. Single. Woman. watching this scene threw their hands to their faces, gasping a HUGE lungful of air, then exhaled and exclaimed in unison the exact same sentiment: "HOLEEEYYYY SHHH..."

You know the rest.

That was the last sound we heard. Nothing more to say. There was a great exodus as everybody gathered their winnings and their chairs, then walked home in absolute silence.

Well, you would think this would dampen our spirits. Terrible things like a tree crashing through a house should surely merit weeping, wailing and gnashing of teeth. But the following pictures tell the tale of how my parents responded: 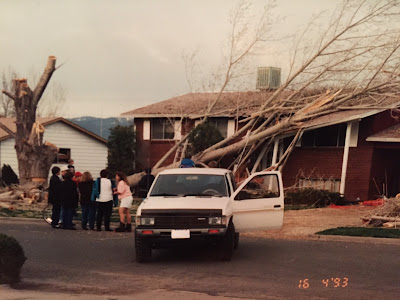 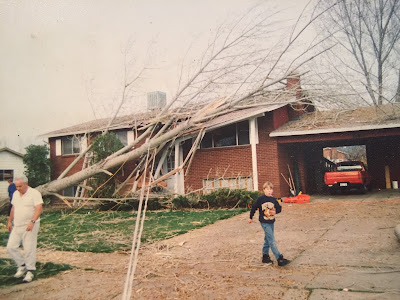 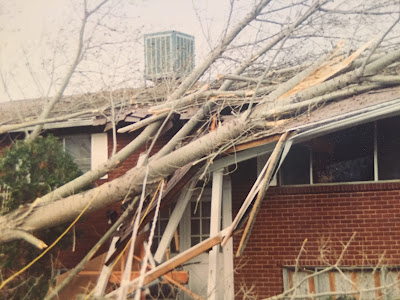 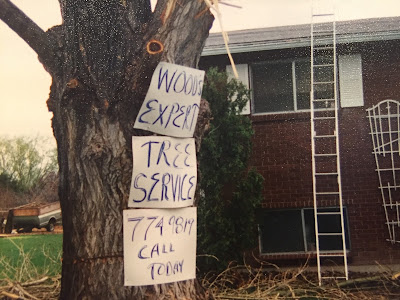 May I always remember the lesson I learned that day—as Marjorie Pay Hinckley so brilliantly understood: "The only way to get through life is to laugh your way through it. You either have to laugh or cry. I prefer to laugh. Crying gives me a headache.”

JUST IN TIME FOR VALENTINES!

My darling dad had a heart attack. I know—JUST in time for Valentine's. I think he takes his holidays  too seriously.

While spending some time in the E.R. and waiting rooms, I've learned a few things I'd like to now share with you:

1)  There are about fifteen bajillion things missing in hospitals that might make the patients and families more comfortable or even save lives, but those all pale in comparison to the one thing they DID do right, which was a Diet Coke and Dr. Pepper machine with very special rabbit poop ice. You can't stand there and tell me that a loving Heavenly Father doesn't exist when the proof is right there in front of you.

2)  While chillaxin' in the waiting room, you may be blessed enough to sit next to a family without any working filters—thought filters...mouth filters...TMI filters...volume filters...all faulty. My mother and I were pleased to be regaled with shouted stories that consisted of these delightful tidbits, and I AM NOT MAKING THESE UP:

"So I threw her out. Ain't nobody comin' at me with a gun, threatening to kill me and staying in my house!"

"Bubba's in the middle of his sex change operation. He's not real comfortable just being gay. He wants to be a lesbian in the gay, um, community. It's not goin' like he hoped. Gonna take more time to get everything worked out down there. Hopefully it don't take too long for 'im to get happy."

"They was all gathered together with their bee-uuuu-tiful family for pictures. Ever'body looked so niiiiiiice. There was so much love in the room, you could just fill it! So much love. And ever'body was there.  Ever'body. Course, not them kids who got adopted out through social services cuz of the abuse and stuff, but ever'body else was there."

3)  It takes several people who are on their toes to keep a patient from dying. On account of there seems to be a missing link in every chain of command. So like, when you go from the first floor to the second, everything they just put into the computer evaporates. And they'll need to take your blood 17 times, because, oh, did somebody already take it? And the boy bringing in your breakfast didn't get word that you'll die if you eat, so when he enters the room somebody in the family needs to scream at him, "WHAT, ARE YOU CRAZY? THIS MAN CAN'T EAT! HE'S GOING IN FOR SURGERY!" and when he leaves, somebody at the nurse's station needs to scream at him, "OH MY HELL, DID YOU JUST FEED THAT PATIENT? TELL ME YOU DID NOT JUST FEED THAT PATIENT!"  So yeah, it takes a village.

5)  There is no amount of gratitude too expansive to express, in prayer and word, that there are people on this earth willing to take on the physical and emotional burdens of people in crisis. From the men in EMT uniforms who wheeled gurneys past us several times at 2:00 a.m., to the janitorial staff wiping up toxic spills in vacated rooms. From nurses who had to find and stab veins that were too modest to show themselves, to doctors who have spent the best years and dollars of their lives educating themselves on the myriad of ways a human body can experience epic failure, and then sit down in front of a worried wife and daughter to dumb it all down for their limited understanding made worse by the anxiety party in their brains.

So those are the things I learned. It seems this life is made up of a lot of reasons, my friends, to clutch our chest and exclaim, "Oh, no!" Fortunately, we live in a world of pop machines and miracle drugs and ER staff and little baby cameras that can be threaded up your arm into your heart to take pictures of an artery that is 90% blocked before it takes your life.

May I gently suggest we remember to say, "Oh, yes!" as morning follows night, and our world is made right again. 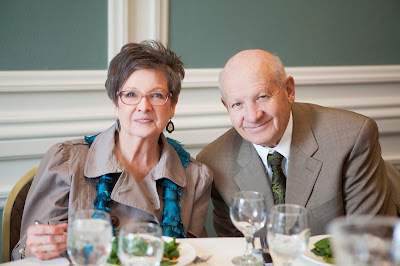 My world was made right when Heavenly Father gave them to me. For which I say, "Oh, yes!"