SHINIEST ORNAMENTS ON THE TREE

Our family was the featured entertainment at church yesterday. I decided to blog it for posterity. You're welcome.

We dressed her in Christmas plaid, long blond hair flowing over her shoulders and lips painted in festive red. When the speaker sat down, Julia stood up and Sterling and I grabbed each other's hands, knowing we were about to be the shiniest ornament on the tree.

Her fingers were like Olympic figure skaters, trilling and twirling and dusting up shimmering notes that hung in the air like magic. Our nerves dissipated as we relaxed our grip and both started to grin like arrogant Cheshire cats.

Suddenly, a troll escaped from Hell and came running across the piano keys.

At least that's what I think happened, because with no warning, every single note was wrong.  And I don't just mean wrong, but I mean it didn't even resemble the song. And this didn't just last for a quick couple of seconds until she got her bearings. No, this went on for at least—at LEAST—20 seconds. An entire page of convulsions. It was like her fingers were chasing the demon as he went crunking across the keyboard.

Then just as quickly as it began, it ceased, and she climbed up from the frozen ice to try that triple jump again. Unfortunately, just as before, the exact same thing happened—all Hades broke loose mid-refrain. Sterling and I looked at each other and we knew; this was going to cost her the gold.

It was also unfortunate that, by this time, I had started to laugh. And I use the term lightly because really, I had a complete meltdown—I'm talking the kind of collapse that gets you kicked out of a rock concert, it's so disruptive.

Mid hysteria, I looked over Sterling's shoulder as he shot a spiritual text to our other children who weren't there: "Your sister just slaughtered the shit out of her piano piece..." More was said, but that was enough. My composure packed up and left to start a band. To make a much too long story shorter, I sob-laughed for the rest of Julia's recital and two more speakers. Had to redo my makeup.

When the meeting was over, every lovely person in the ward put an arm around Julia and commiserated about what had happened, even while pretending nobody had noticed. Most of them ended with, "But you sure looked pretty" (as you went down in flames). Jules handled it beautifully, and I stood by her side, wiping remnants of eye liner off my chin, knowing I was an enormous liability, but grateful that the glare of the spotlight was dimming.

Turns out I was wrong.

At the conclusion of Sunday School, a good man stood up to say the prayer—a thoughtful prayer. There were several extended pauses between phrases and he finished one particular sentence with the name of our Savior. Well, in our culture, those are trigger words, you guys. Prompts, if you will. They signal the end of the prayer, and that's when we all exclaim, "Amen." But that kind of thing is all about the timing.

THIS time, it was my dear mother who misread the cue and offered up a hearty, "Amen", only to realize that, apparently, there was more to be said. He ignored her suggestion and the interrupted prayer continued. My mom, mortified, whispered, "Don't you dare start laughing," but it was too late. And I haven't stopped since.

We all gathered together that afternoon for dinner. Every few seconds, we relived our humiliation, and lamented that our nearly flawless facades had crumbled to pieces. But my mom put the prettiest bow on it when she said, "You know, I've never liked someone more because they were perfect. I only like them more when they're not."

Pretty sure a lot of people like us more.


I asked Julia for a Reader's Digest reenactment. She obliged, bless her heart. Just times this by 10.

I CAN'T WORK OUT

GOOD NEWS! I just received a .05 cent refund from Amazon. Must be living right.

By the way, did I mention we adopted a dog? Yup. Lost my ever lovin' mind. It seems one day I woke up and said, "I feel like I want a burden so heavy that it wakes me up at 4:00 every morning with anxiety. Plus, we have a lot of things that could use a good chewing; sprinkler heads, expensive shoes, fermenting garbage, our cat. How we've lived this long with our wicker furniture in great condition is beyond me.  Also, we have a lot of disposable income that could be spent on kidney jerky and stuffed animal squeaker toys to be strewn about the yard and ripped to shreds. And my parents have it too good. There is far too much peace in their lives, as they're able to get from house to car without a hairy beast charging at them. That's just wrong. There is but one solution: How about we adopt a puppy?"

And so we did. Luna Bingham is her name. Short for Lunatic. Also Lunachick, Lunar eclipse and Luna Tuna fish. She answers to all of the above as well as to any movement, light or sound of any kind made anywhere in the entire house or surrounding neighborhood.

A few things convinced me this was a good idea. Guilt, for sure. But especially the earnest promises from my children that they would ABSOLUTELY clean up her poop, take her for daily walks and train her to shut the hell up. And now it's clear I raised a bunch of lying jerks.

Every one of my pockets—jackets, robes, pants, pajamas—now house a roll of doggy pooh bags. I think twice before entering the kitchen which is adjacent to her laundry room vacation home. And anything that fits through her doggy door is pulled through her doggy door, whether it wants to be or not.

Yes, I wanted to say all of that and then offer to sell the puppy to her in return for a cold Dr. Pepper, but I didn't, because I was suddenly yanked inside Petco by my Lunatic as she went in search of a very specific smell that ended up being her own rump.

Anyway, just thought you all should know I have a dog and that's why I can't work out. Don't ask me why, it's just the way things are. And yes, I love her, so shut up and quit judging me. But just because I love her doesn't mean I have to like what I've become.

Now if you'll excuse me, I have a sharp piece of doggy bone I need to step on and some frozen feces calling my name. This is the life. 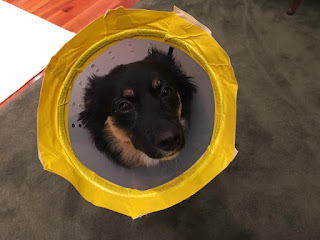 Luna and her cone of shame with customized duct tape extension. 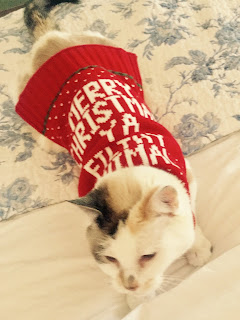 Sassy is not a fan of Luna. But still, here she is wishing her a Merry Christmas with her sweater.

And a pinch (vat) of laziness, which my fleshy bod already bore witness to, so don't act like that's news.

But really, every day I pray that today will be the day. Today I will be BRILLIANT and HYSTERICAL and FILL YOUR BLACK SOULS WITH LIGHT! So I sit down to the computer, hours pass, and somehow, when I climb into bed at night, there is a new Kate Spade purse on its way and no new words on this blog.

I am plagued with insecurities.

What if I repeat stories?
What if I sit in front of the computer screen and nothing but farts come out of my fingertips?
What if each sentence is like a selfie taken from below?

I have lied to myself that I am simply being patient. Waiting for Heavenly Father to open the Heavens and heap humor into my skull like dung in a garden. But He doesn't operate like that. Something about, "Faith without works is dead."

So here I sit, belly full of salsa and yogurt (a combustible combination) and Christmas tree full of ornaments, hoping this screen will suddenly be filled as well. But the only thing that seems to be happening is Sterling is watching a Charlie's Angels episode without me, and my FOMO will not allow me to chill.

Thus, I will end my ramblings with a promise that tomorrow, I SHALL RETURN! I can't promise there will be brilliance, hysteria or that your black souls will be drained like the swamp of DC, but
I.
WILL.
BE.
BACK.

In the meantime,  enjoy this picture of the Kate Spade I'll be sporting come early spring and try not to let the envy turn you into a Christmas elf. 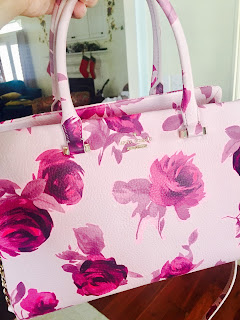 If loving you is wrong, I don't want to be right.