I'm pretty sure that jelly bean calorie content is null and void any time after the stroke of midnight on Easter.
Same goes for all chocolate in the shape of an egg, chick, or bunny.
And Rollos in pastel foil.
And egg shaped gum in plastic cartons.
And anything that once lay in a bed of cellophane grass.
You can quote me on that.
Posted by Lisa at 10:53 AM 12 comments:

So Jules has been BEGGING AND HARASSING to get braces. For like two years. No, I'm not kidding. And yes, she is weird. Anyway, I've repeatedly told her that they can't attach brackets and wires to imaginary denticles, as she has, at best, scattered teeth in a random pattern throughout her mouth.
So things suddenly became crucial this past Sunday, in that she found out her twin cousins have THEIR braces date set for this coming August! Which meant to her that they must be booked solid, and it is IMPERATIVE that she get herself on the schedule. Clearly this is a competitive industry, and those teeth will not straighten themselves, Mother.
She actually pulled out the phone book (a relic from the past you may or may not be familiar with) and pushed the numbers for me, before handing off the phone and telling me to speak into the receiver. The appointment was for today.
So we're sitting there with the X-rays in front of us, as they explain the procedure, etc. With the end of the pencil, they point to a section of her mouth and say,
"As you can see, she's missing this incisor here."
I laugh, and then say, "Wait, what?"
"Yes, well, it just didn't grow. You can see that it's not showing up in the X-ray."
Julia booms~"SEE MOM! I TOLD YOU THAT THIS TOOTH HAS BEEN MISSING FOR 2 YEARS! YOU DIDN'T BELIEVE ME! YOU TOLD ME IT WAS FINE!"
My eyes told her to shut up.
But sure enough, there was no tooth. In fact, on the other side where that same incisor should be, there is this protrusion that she has lovingly referred to as her "vampire fang." We thought it was just turned sideways. Nope. Seems it's a pointy little nub. A stupid, ugly, pointy little nub that FOR SOME REASON MUST BE HER MOTHER'S FAULT!
But listen, I am not taking responsibility for this mutation. Nosirree. I think we can all agree that it is her FATHER'S FAMILY who did something...and I'm not sure what, but SOMETHING...to bring us to this point of crazy a$$ tooth germination.
And when I said something to that effect—I think it was, "It's the Bingham side. Her father. They did this," they just smiled patronizingly and mumbled, "That's what they all say."
The good news is, it can be fixed. The bad news is, they look at me weird now. Like maybe while I was pregnant with her, I hoarded for myself some of the building blocks needed to make her mouth. Like maybe that incisor is in MY jaw, and I just didn't want to give it to her. In fact, I smiled a lot, so they could see I only had the two I was supposed to, but they didn't seem to notice.
Anyway, it is what it is.
And it is...just another notch in my guilt belt. No wonder I keep gaining weight~I never have to cinch it tight—it just keeps getting bigger and bigger and bigger...
Posted by Lisa at 12:39 PM 15 comments: 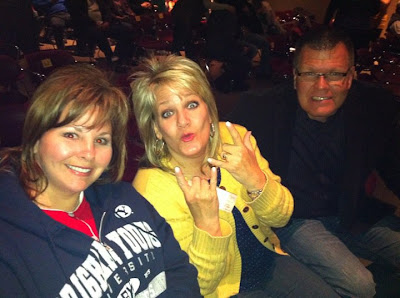 Just got home from St. George, Utah. We stopped by the "Squeaky Cheese Factory" in Beaver. Did you know Beaver shuts down at 6:00 PM? Yeah, no. Seriously. Even McDonalds. Yeah, no. Seriously. So when all we could find was static on the radio as we rode out of town, Jules said, "Geez. Even their RADIO shuts down at 6:00!" Good one, Jules. Here's another~
Jules~"Um, Mom? Do you have rotten walnuts in YOUR ice cream, too?"
Me~"Nope. My walnuts are fine. How do you know they're rotten?"
Jules~"Well, first of all, most of them are green!"
Me~"Ha! Not walnuts, dear. Pistachios."
Now just so you're not angry, thinking I had any fun without you, (besides ROCKIN' OUT to REO Speedwagon, which is clearly illustrated in the above pic,) let me assure you that the sky was as a leaking urine soaked baby diaper nearly the entire time. It just smelled better. And the riotous wind ripped through my hair, adhering most of it to my lipgloss every time I stepped out of the car. And the warning cry of "ROAST," was heard loud and often in the automobile, on account of us implementing the family vacation motto a few years ago. It is as follows~
"ANY AND ALL RUMP ROASTING THAT OCCURS IN AN OCCUPIED FAMILY VEHICLE, MUST BE MADE KNOWN TO EVERY INHABITANT, AND IN A TIMELY MATTER, BY SHOUTING, 'ROAST!' IN ORDER THAT MOUTHS MAY CLAMP AND WINDOWS UNROLL, SO AS TO KEEP THE DAMAGE AND JUSTIFIED HOSTILITY TO A MINIMUM."
It seems to be effective, but there are occasional mishaps, in that we'll get a mouthful of shart essence without so much as the telltale rumbling. But they're teenage boys. We take what we can get.
Anyway, just wanted to catch you up to date. Oh, and here's something fun...SECOND SON CHRISTIAN DALE IS THE NEW STUDENT BODY PRESIDENT for his High School next year!
I know!
And I know what you're thinking. The answer is yes—I did do it for the sweater. What's your point?
Posted by Lisa at 7:12 PM 16 comments:

Okay, I am hanging my head in repentant shame. I've ignored you dear folks, and kind of replaced you, in a way, with my actual life. Life things like Student Body President elections, neuro-feedback therapy sessions, children failing core classes needed to graduate, thus leading to what they now like to call,"remediation"~or what we used to call, "flunking." Being a Flunkard is way more fun to say, but brings with it it's own devastation. Anyway, things like that, leaving little time for the things that bring me joy, with the exception of a daily bag of Cadbury mini-eggs, to get me through on a wing and a fatty prayer.
So you've been on hold. For about two weeks now. And I would imagine that, after awhile, you got a little bit sick to death of the elevator music that's been playing. And I don't blame you, because, "Like a Rhinestone Cowboy" instrumental version, has a pretty short shelf life, and I'm confident it went rancid by the late 70's.
Which makes me feel even worse about the fact that I can't write more today, and will be screwing the lid back on the jar, so you can pickle in the fridge for a few more days, since my DAMNABLE MIGRAINE HEADACHE IS ON DAY NUMBER THREE AND A HALF, AND THERE IS NO END IN SIGHT!
See, Migraine=stupid words coming out of my mouth. Mostly cuss. And I can't subject you, my dear, fresh, spring chick peeps, to profanity laced diatribes against the headache gods who JUST CAN'T LET IT GO, CAN YOU?
So let's just call it a day...or 14...whatever, and wait for those 47 ibu's to kick in. May the heavens bless you for your patience and long suffering~two courses I flunked back in Jr. High, thus, the migraine headache "remediation."
Love, Princess Lisa
Posted by Lisa at 12:26 PM 12 comments: