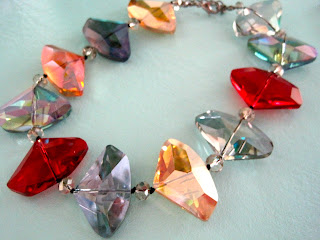 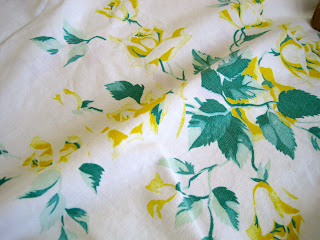 Vintage Table Cloth. I could just KISS the homemaker who kept this so pristine. 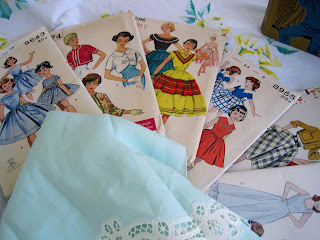 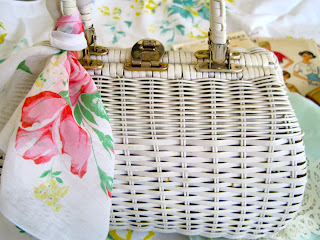 Wicker handbag with rose voile hankie. I just got dizzy. 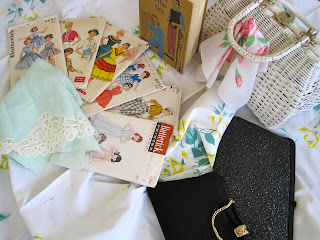 The kit and caboodle.

Is it any wonder Brenda and Just a Bed of Roses FREAKING. ROCKS. MY. WORLD?

Okay, another Islander post. And I'm sorry to say there is no profanity, which may disappoint most or all of you. But apparently they frown on cussing in local newspapers. Whatever. (eyeroll)

Ahhhh, April! There’s nothing quite so intoxicating as the smell of freshly cut grass, exploding Peeps in the microwave and the agonizing thrill of what I like to call, “You’re scoring my soul on that clipboard.” Otherwise known as Spring Tryouts.
Soccer tryouts, office tryouts, baseball, dance team, cheerleading tryouts...the rights of passage that cleat stomp every earnest heart and smear the remaining guts across the football field turf. And yet, like a pig to the mud, me and thee return to it every year.
I first became enthralled when my big sister, Nicki, made jr. high cheerleader. Suddenly, to me anyway, her world became an ethereal haze of perfection. First, she got to be “initiated,” which was code for, “center of attention”. They kidnapped her and did her hair in crazy ponytails and made her wear a giant sign at the Layton Hills Mall. And when she returned, she was sporting a new t-shirt with pink bubble letters that said, “Improve your image, be seen with me.” Which I thought showed great confidence, but my parents considered elitist—aka; “Bunch of stuck up snots.” And of course, she pretended the whole hazing incident was mortifying, but deep down, I knew. I knew that it meant she was popular as H.E. double hockey sticks, and as the anonymous second child, I would need to find a way to be that, too. Or kill trying.
You see, being a cheerleader meant you balanced precariously on the very tippy top of the pyramid, then flung yourself off into a back tuck, landing on your feet with spirit fingers and wild, thundering applause from the crowd.
Being a cheerleader also meant boys on bikes came over to your house all summer long—boys like Kent Nye and Chris Cannon—with awesome wispy feathered hair and comb tails that stuck out of the back pocket of their Hash jeans while they performed white hot, hands free, ten speed moves.
And being a cheerleader meant you smelled like Doublemint gum, vanilla musk and Miss Clairol and had an immediate fade out of every awkward social skill and they let you into Lakeside movie theater for FREE, people! Just for being cute! Man, I needed me some of that!
By the time tryouts rolled around, it was simply a matter of formality, and everybody knew it. I mean, duh, my sister was already a cheerleader (smirk, eyeroll and shoulder shrug). Donning my red jumpsuit with the stretchy rainbow belt, I leapt into the gym like a lamb to the slaughter:
“Ready, okay! North Davis Jr. High, School we all love!” I knew the song and routine by heart.
Jump, kick, round-off back handspring, splits! Nailed it!
Now for the cheer we had to make up—”REACH FOR THE STARS, SHOOT FOR THE MOON, THE NORSEMAN TEAM WILL SHOW YOU HOW!”
Wait—that doesn’t rhyme. My tongue went numb and I started to black out. Beautiful Head Cheerleader, Gail Keller, had to drag me by the hand off stage right and go over the words with me. I smiled and nodded, all the while my brain was a tree in the wind.
I’m sure you’ve gathered by now things didn’t go as planned, because trees don’t belong in brains when you’re trying to remember a cheer. The judges chose to provide me with another year to ponder and prepare, before I eventually made the squad.
And just like most things in life, the reality bore little to no resemblance to the fantasy, as my own cheerleading experience consisted of vicious ostracizing for not attending Spirit Camp, weeping, mournful journal entries and hunkering down as the base of every. stupid. pyramid. You can’t do spirit fingers when you’re the base, friends. Little known fact.
Ultimately, I tired of the ritual, but only after wearing it out. And then I went and had a fistful of kids to claim their victories as my own. (Their failures belong to their father, because I’m a giver.)
In conclusion, a couple of things: First, Spring Tryouts are from Satan and they ruined my life. But good luck to the rest of you—MAY YOU ALL MAKE THE SQUAD/TEAM! And finally, would it have KILLED you, Kent and Chris, to have performed one single ten speed drive by? No. No, it would not.
Bless your selfish hearts.
Posted by Lisa at 9:46 PM 2 comments:

Just so you don't think I've been doing NOTHING, I figured I'd post one of my recent Islander articles. And if you've already read it, feel free to opt out and go eat some chocolate, because mini-egg times a wastin', friends. The season is near completion! In fact, I already know this story, so I'll join you. :) The rest of you, eyes on the blog—

Before we go any further with this relationship, I should probably tell you that I can carry a bigger rock than you. That’s right, you heard me. And I don’t need to prove it, because that’s just childish, but it’s important for you to understand that I can, even though I don’t want to right now, but if I did, it would be bigger than yours.


This mastery of rock lugging was a skill honed early on in my years at Syracuse Elementary. See, there was this big, fat, spidery canal that ran behind the school...for years...completely unfenced, unnoticed, unattended by any government agency charged with impeding children’s creativity and reckless joy. The 70’s were WAY MORE FUN (and perilous) than now.


The bell would ring, and we shot out of the gate, arms flailing wild and frenzied in the spring air, propelling us toward the “death ditch,” never receiving so much as a bored yawn or finger lift from teachers keeping watch. The children “less determined,” never reached their destination, as they were enticed by the enormous A-frame swing set, allowing you to soar like a bird while your fingers had the @#$% pinched out of them by the linked chains. Another gaggle was distracted by the brilliant rays dancing off the 20 foot metal slide. Smoldering in the sunlight, that baby could burn the top couple layers of skin clean off your upper thighs on a warm day, but the waiting line wound around the entire sandpile area. Why? Because IT WAS A PLAY GROUND, PEOPLE! AND LOOK AT US! (those of us who are left anyway) WE’RE FINE! FINE, I SAY! Geez, you big babies.


And okay, yes, in hindsight, it appears that children might have been considered a little bit less precious back then. But really, really, how many layers of skin...or fingers...does a child need, anyway? I think I’ve made my point.


Anyway, we figured the best place to hold these “Very Important Club” meetings was behind the biggest tree trunk on the canal bank, which was lined with stones that we liked to imagine were placed there by cavemen. Or founding fathers. Or 6th graders. All equally impressive.


The earnest pledges would gather around, and the vetting process began:


“We’re gonna need you to carry a rock.”


And just like that, they were kicked out. But those willing to think outside the box would squat, heave and hoist with all their underdeveloped muscular might, because the bigger the rock and longer the haul, the loftier your esteem in the organization. For what purpose, we knew not—we just knew it was important to exert every effort, even if it meant a busted carotid artery to deal with later on. And as I said, the bigger and longer the rock haul, the higher your position.

I was President (she said modestly).


I tell you this, not because I expect you’ll bow down to me the next time we meet up in the grocery store, although who am I to discourage your appraisal? But rather, to introduce the suspicion that maybe...just maybe...Heavenly Father loves children who grow up in Syracuse just a little bit more than He loves urchins from other towns.


Because I kind of think this story proves that He scooped up all the best stuff He could think of, and stuck it into the dirt and grass that we call home. And before you get all weepy because you grew up in some other—and by other I mean inferior—place, and are just now being made aware that you were a distant second on His list, you can rest well in the knowledge that if you’re reading this, you have righted that wrong. Because you love your children more than your parents did you. And remember, I’m just the messenger.


In conclusion, I believe we’ve established several things: First, spidery death ditches=all that is good and holy. Second, children are born with excessive body parts. And third, I can carry a bigger rock than you. Bless your feeble heart.


Now put away that gun. Before I crush it with this boulder.