HUSBANDS CAN SLEEP THROUGH ANYTHING

A couple of Sundays ago, while singing praises with the choir, I tried to make loving Easter eye contact with my children. However, against my warnings, they were in a relationship with their smart phones so they didn't even notice. But as it turned out, they had a very good reason for being on their phones as our east coast kids had texted that they were on their way to the hospital TO GIVE BIRTH TO OUR VERY OWN EASTER CHICK!

I busted out of the chapel doors, dialing their number and apologizing to Jesus for the interruption while I raced outside. Sure enough, there were contractions involved and everything and they said they'd let us know what they found out. Well, that was as good as a birth announcement, so I made it official! Even going so far as to announce loudly and confidently to every. single. person. I. came. in. contact. with. that "UNTO YOU IS BORN THIS DAY..." and yes it is three weeks early but she went in for her exam a couple of days ago and she was dilated to a three and 80% effaced and I'm sorry that your grand baby is due this week and there are no signs of labor you have my pity but we've clearly been kissed by angels and oh my heck I bet she looks like me and I'll probably call the airline as soon as church is over and you know I just had a feeling something special was going to happen today and I bet she's already been born and they're putting a bow on her full head of hair right now and that's why they haven't returned our calls or been responding to texts and this is so exciting so STOP YOUR LESSON SO I CAN STAND ON THIS CHAIR AND FIELD QUESTIONS BECAUSE THIS IS BIGGER THAN ANYTHING YOU'VE PREPARED!!!"

By the time church ended, they were back home.

So we went about our labors (no pun intended) and tried to carry on as we had before, except for now she might as well have been three weeks late than early, because the shot had been fired and our baby runner was still just standing there on her mark while aaallllll the others were dashing past to win smocked dresses and minky blankies.

Every day we ask and every day same story—No Baby—reported with a subtle undercurrent of seething, hemorrhoidal rage that only a woman sent home undelivered from the hospital understands.

Then a few days later, Madelyn had a new story to tell.

She had made herself a tasty peanut butter and jelly sandwich for dinner, and it just wasn't sitting well. For hours into the night, she dealt with acid, walking around, rearranging and fluffing pillows, hoping for some relief. Finally she decided she should go throw up. Just a little bit, you know. Like maybe a "smidge" would do it, as vomit is measured. So she dropped her head over the sink—no sense wasting a full flush on a smidge—and proceeded to retch until her painted toes came popping out of her nose holes.

She completely filled the sink. And covered the mirror. And most of the countertop. Apparently her stomach had been saving up for something special, and this was it.

It was a puke to be reckoned with, no smidge about it, and her nine months pregnant body couldn't contain...well, most anything...thus, she had to strip from the waist down if you know what I mean. So she's standing there, half dressed, stomach and bladder emptied out, and completely overwhelmed with vomit, then realizes somebody has to clean this up. And as all mothers eventually learn, she's it.

She tries rinsing it down the sink. The sink clogs. Of course the sink clogs. So she grabs the only thing she can find—a Star Wars cup—and starts to scoop and transfer cupfuls of puke from sink to toilet.

She's trying not to breathe, her hands are covered in spew and she cannot believe that none of this has stirred the sleeping man in her bed.

When she's all done scooping, transferring, wiping and cleaning, she flushes victoriously.

And that was it.
Her breaking point.

She starts to bawl...and curse...and does the only thing she can do in between sobbing swearwords, which is grab the cup and start re-transferring puke from toilet to sink, hoping to attain the perfect ratio of vomit, toilet paper and water. During all of this, she hisses to the heavens, "ALL I CAN SAY IS, THIS HAD #$%^&#  BETTER GET THINGS GOING WITH THE BABY!"

But as it turns out, she was less pregnant than she had been a week ago. The doctor's actual words were, "No progress." But she swears she heard, "Looks like your cervix is closing back up again. Weird."

Anyway, if you got this far in the story, you deserve some chocolate, so go get it while I finish up. The moral to the story is this; It can always get worse. And often does. Also, toilets can't be trusted to do their job. And probably even more important; husbands can sleep through anything. 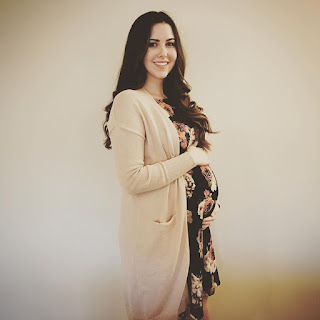 Madelyn is far more beautiful than any soon-to-be mother has a right to be.