First of all, Prince is dead. I just thought we should mention that so nobody is embarrassed if I start to wail out the lyrics to I Would Die 4 U (complete with hand/face actions) during this blog. And just for the record, that exotic baby man driving his Little Red Corvette will always have a place in my heart...and my garage. Amen.

Second, my youngest son has two months left on his LDS mission, and will be returning to pass unrighteous judgment on me, so I have to make it look like I've been doing something besides eating cinnamon bears for the last two years. Which is why I have to get busy redecorating a room or two. Not his room, mind you. His room is a shiz hole. Always has been, since all three of the boys lived there together and we found a booger kingdom hidden on the backside of a headboard. There's really no coming back from that. Best to just light a match and walk away.

Anyway, I'm thinking about throwing some paint around in the sitting room, which is my favorite room. But it's going on twelve years, people. It's kind of a decorating version of the leisure suit—it had its day. Of course the leisure suit was a sin against God, so maybe that's not the best example, but you get the idea.

Plus, we all know people who held on a liiiiiiitle too long to their favorite things. Ie; acid washed joggers, Farrah Fawcett hair, frosted blue eyeshadow and perms. All of which, oddly enough, have made a comeback, so never mind.

I have big plans for that room. Big, BIG PLANS. And as soon as I steal those plans from Pinterest, you'll be the first to know.

Speaking of sisters having babies (just go with me here) my youngest sister has just announced she is HAVING A BABY!!! That makes six. SIX BABIES, YOU GUYS! Pretty much she's a baby hoarder. When she's pregnant, she vomits in her sleep. And can't even drink water. But she's a size 0 and has stunningly beautiful children, so I think that evens things out.

So to sum up, missionary son, cinnamon bears, leisure suits, Farrah Fawcett, babies and vomit.  It's pretty clear I have laser focus when it comes to writing this blog. My brain is a horse that keeps getting spooked.

Thanks for holding onto the reigns and coming along for the ride. 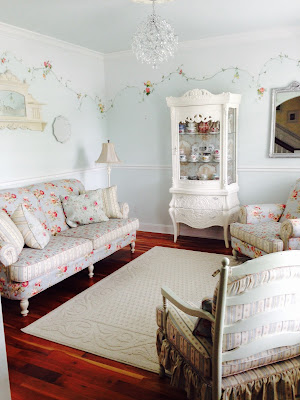 Farewell, beautiful sitting room, and thank you for the last 12 years.

I'M BACK FROM KAUAI! And I yell this because I left my keys on all caps lock. But also because I want everyone to know that I am a world traveler and that's why I ignored your texts and all responsibilities for 8 days and 7 nights. Two of which were spent in an airport with 350 other passengers and a flight attendant who consistently announced bad news that ended with an insincere, "Mahalo."

Anyway, I waded through piles of sand and dead skin to give you this blog post so that you, too, can feel like you were right there with us.


So let's begin my travelog with a picture. This is Julia, otherwise known as Goddess of the Pacific Isles. 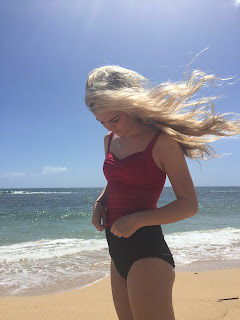 It is important to note that this is completely un-retouched.

Now,  a picture of the apple tree from which she fell— 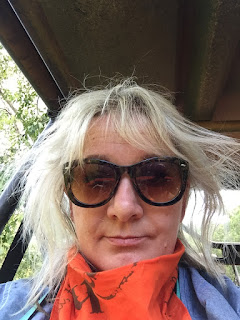 Of course, 47 year old tan is way different than 15 year old tan. Julia is a wind in her hair bronze skinned beauty in Hawaii. I am a chocolate covered macadamia nut eating, stringy haired, "I can see most of your scalp and it's burned" melted make-up, age spot sporting, "Is that Lisa? Oh, wait, no, it's a sun-bathing seal,"  kind of exotic. And just for the record, it is not mascara smeared on my cheek. It is sun damage. So quit trying to wipe it off.

Even with all that going on, we managed to visit about ten GLORIOUS beaches, ATV through the jungle, float on tubes through abandoned sugar cane mines, jump in waterfalls, swim with the turtles, almost STEP ON AN OCTOPUS, YOU GUYS—THEY REALLY EXIST! We also luau-ed, ate some pig and were woken up by roosters at 4:00 a.m. Also at 4:03...4:10...4:17...4:18...4:25...it's a really good thing that they're a protected species.

We fruitlessly searched for cold drinks and sea shells and ignored the fact that we spent more on sub-par food than our airline tickets. I grew a few chin hairs and one fingernail on my left hand, and we snorkity-snorked away our afternoons under the deep blue sea, where Julia was stung by a jelly fish. To which I promptly replied, "You're fine. You imagined the searing pain." Because that's what good mothers do.

Then, on our very last night in Princeville, Layne said, "Hey, there's a really cool path that you can go down to the shore and watch the sun set behind the ocean. There might be a few areas you'll need to hold onto a rope, but if you feel like you're up for it..."

Well, I'm nothing if not up for a rope strewn path down to the shore. So we swallowed our last bite, threw on our tennis shoes, and zipped down to the trail.

A trail made by Beelzebub himself.

At least that's how I went down. Not sure what other people did.

About 30 seconds into the completely vertical decline, the three strands of fat wrapped sinew that currently form my thighs screamed and snapped in rebellion. "WHAT IN THEE...?! YOU ARE ON YOUR OWN, LADY!" And it was all downhill from there. Figuratively and literally.

Until we had to go back up, which is when the prayers began in earnest. All I asked was not to need a rescue op. But I promised way more, so He would feel like it was a bargain if He obliged. I am happy to report that a deal was struck, and I made it back to the top on my own, where Julia sing-songed,

Me: (cough, hack, spitting out blood)

And now, I bid you Aloha, as I must go practice the beautiful Island Girl ritual of combing dead scalp skin out of my hair. Kauai just keeps giving and giving. To which I say, "Mahalo". 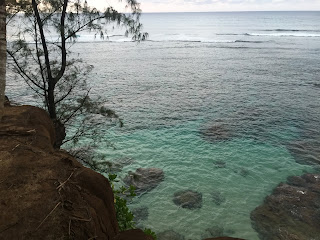 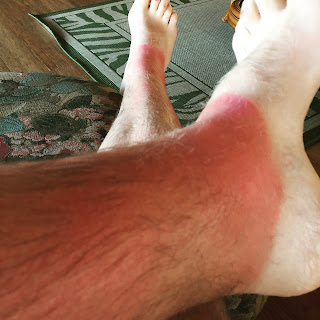 "Sunscreen is for fools" 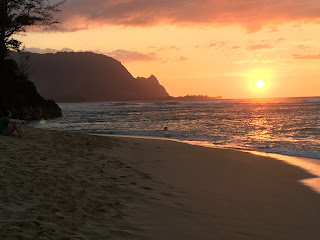 The view at the bottom of satan's path 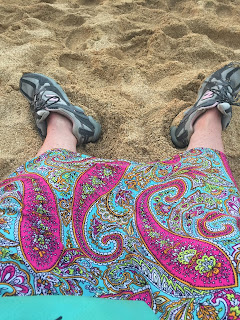 The other view at the bottom of satan's path 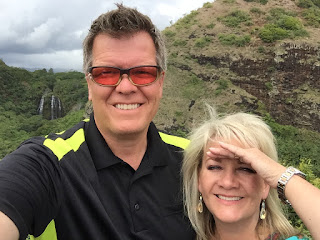 We were looking for "De plane! De plane!" (Fantasy Island was filmed here)
Unfortunately, it was delayed five hours