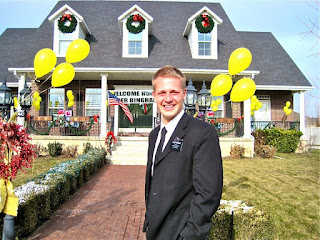 YES! he is just as WICKED AWESOME as we all hoped he'd be. Even MORE handsome, MORE delightful and MORE spiritual than we dared dream.

And listen, folks, don't let's hate, okay? I mean, I'm sorry if YOUR son isn't getting up early to study scriptures and do the dishes that his brother was supposed to do, but never got around to, because he was busy rubbing his own bald head.

And I'm sorry if YOUR son doesn't speak lovingly to his sister, calling her "so cute," and "pretty little Jules," and all sorts of complimentary fluff, even when her own mother can't conjure up a favorable adjective in her behalf.

And I'm sorry if YOUR son doesn't call up the stairs, in reply to you asking who's down there and if they're still playing X-box, "It's me and Chris! Do you want us to come up now? No? Are you sure? Because we will!"

Yes, I'm sorry about all of that. But just because my son is PERFECT, well, it doesn't mean that your son is iMpeRfect...even though it's highly unlikely that your kid can even hold a melting candle in front of the glowing countenance that IS my son.

Anyway, I just wanted to confirm to you all, that from my loin has sprung a specimen of manhood that only the gods could expect to sproing. And he'll be heading up to school at juuuuust...preciiiiisely...the moment that the clock strikes twelve and we're left grasping at his shadow, holding the forsaken glass slipper, which will signal the end of the magic spell that allows us to view him through these rose colored glasses, ne'er to behold him farting or burping or itching his bum in public.

Which is just the way God intended it.

And oh! Hey! I got you something! A little belated, but thoughtful, just the same. Movie making at it's finest! Enjoy!

From God's Arms, To My Arms, To Yours

He's sleeping at the mission home right now.
Tomorrow, he packs his bags and bids a final farewell to the beautiful people of Brazil—his home for the last two years. Then clothed in one threadbare suit, and leaving behind all the rest, he will climb aboard the plane in the early morning hours that will bring him back across an ocean and a continent and into my waiting arms.
It's been done before, of course. And I'm not speaking of other sons, of other mothers, of other missions—I'm speaking of my own. It's been done before, this coming and going, sending and receiving, giving and taking. Yes, he was mine before he was theirs. And though I am his earthly mother, he was His before he was mine.
I remember a song from a few years past. Beautiful lyrics, relating the story of a young woman who had given up her child for adoption, explaining to the new parents how she had come to this place.
And though the verses are meant for this life...an earthly adoption...I can't help thinking that those pleas sound very familiar. That I was, truly, the interim parent. Having been entrusted to receive these spirits that were given to me by a loving Father in Heaven, and then expected, and even required, to relinquish them to the waiting arms of his next home. Brazil.
And I did.
If only for a little while.
From God's arms...to my arms...to yours.
And now, on bended knee and weeping with gratitude, back into my arms again.
If only for a little while.
Posted by Lisa at 10:28 PM 13 comments:

Well, the demon piggie wind is screaming so ferociously outside, that I have no choice but to stay inside, in front of the fire, drinking something poured over rabbit poop ice and blogging in my pajamas. I'm afraid if I try to get dressed, the wind will tear the size 2 jeans right off my shapely legs, and we can't have that, now can we? Shut up.
Anyway, I'm done giving you the silent treatment—and don't act like you don't know what you did. (two fingered eyeball point) But I think you've been punished long enough. Let us begin:
Happenings lately~
*I hosted a lovely Thanksgiving spread for 38 this past week, and just now noticed the dead flies in the window ledge of the bathroom everybody used.
*Since my son is still in Brazil, it's up to me to register him for his University classes, and I'm too stoopid to do it. Near as I can figure, it's some sort of filtering process—if you're smart enough to maneuver through the maze and find the cheese, well, you're rewarded with four years of tuition, books, fees and loans. But it's okay, because you trade that in for a piece of paper. That probably, and I'm just thinking out loud here, but probably you could find online, and print on your own, for way less money. But whatever. We say it's the journey that matters, folks. But in all my middle aged years, I've never applied for a job where they asked anything about my journey. The paper was all they cared about. Clearly they're not as enlightened as "we" are.
*I went to Just a Bed of Roses. Spent a lot...and I mean A LOT...of money on items that were just a little bit too special to give to you, so I kept them. See, Brenda goes out of her way to buy things especially because she knows I'll like them, and it would really hurt her feelings if I gave them away to others, all willy nilly and such. So in order to keep her heart intact, I'm biting this bullet called materialism and greed and keeping the universe in alignment.
*My son just called and because of power outages, etc, caused by the demon pig winds, wants me to call the school and give him permission to come home. Yeah, right. Like I want him home. Suck it up, son.
*He just texted me, "There's nobody in class!" And I replied, "Except you." He'll thank me one day.
*And lastly, MY MISSIONARY SON WILL BE HOME IN 15 DAYS! I KNOW! I CAN'T STOP SCREAMING EITHER! IT'S JUST SUCH AN ENORMOUS THING TO FATHOM AND IF I'D SHARED WITH YOU HIS LETTERS OVER THE PAST TWO YEARS, YOU'D BE BEATING DOWN MY DOOR TO CATCH A GLIMPSE OF THIS GODLIKE CREATURE, WHO STARTED OUT AS A SPOILED LITTLE HOP TOAD, AND NOW STANDS ERECT AND SHIMMERING, JUST LIKE EDWARD'S CHEST IN THE SUNLIGHT, EXCEPT HIS IS FROM RIGHTEOUSNESS, NOT SUCKING HUMAN BLOOD.
And THAT is what has been happening around here lately. Oh, plus I need to figure out a way to lose 20 pounds in 15 days, in order that there not be an awkward moment at the airport, wherein my boy searches for his adoring mother amidst the frenzied fans, only to find she's been swallowed by two years worth of Dr. Pepper, divinity and chocolate cream pies. I might need to wear a name tag.
Anyway, hope you've been well and happy and had enough time to think about what you did to deserve no blogs from me for three weeks.
Love forever,
Princess Lisa
Posted by Lisa at 9:33 AM 8 comments: